The following seems worth re-posting, as some folks still seem impressed with the fine tuning argument. It seems like a fairly obvious point, yet I haven't seen it mentioned much in the fine tuning discussions I've read. I'd be grateful if anyone can show me the glaring flaw in the argument that I'm missing. At the Prosblogion link, Alexander Pruss kindly responded to my remarks; I'll have some comments on his response soon.

I should say again that I don't think the following is a very good argument for naturalism - it's just a way of showing why the fine tuning argument for God is hollow.

The usual fine tuning argument goes like this: Our universe is governed by natural laws that involve certain numerical parameters - the cosmological constant, the strength of the nuclear force, etc. Some of these parameters must lie in a very narrow range in order for life to exist: 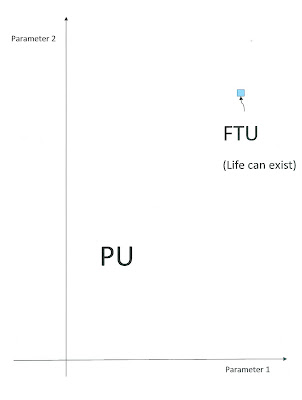 So, given a naturalistic hypothesis (N) and general background knowledge (K), the probability of a fine-tuned universe is small:

On the other hand, given the theistic hypothesis (T), we would expect the universe to be suitable for life: P(FTU|T&K) is not small, or at least not as small as P(FTU|N&K).

One of the (many) problems with this argument is that we can't assert that the probability is given by the ratio of the areas without making many additional assumptions: that the values of parameters 1 and 2 are randomly chosen from the space of all parameters, for instance. But that's not the objection I want to pursue. Rather, I want to point out that the probability envisioned in the fine tuning argument is a sort of prior probability that ignores some of our background information: namely, the fact that life actually exists. That is, we have to take (K) to mean "general background knowledge not including the knowledge that life exists."

But we actually do know that life exists (L), and it is perfectly legitimate to include this knowledge along with our other background knowledge. If we add this knowledge back in, then trivially P(FTU|N&K&L) = 1: under the naturalistic hypothesis, the only way that life can exist is for the universe to have parameters that allow the existence of life.

But that is not true if God exists! Indeed, under theism, there is no reason to expect that the universe will be fine-tuned.

Remember that God is, by hypothesis, omnipotent. That means that God could  have caused life to arise by miraculous means, even in a universe that was not fine-tuned. Say, for example, that the universe had a value of the cosmological constant that caused it to expand too fast for galaxies to form. God could have prevented a galaxy-sized region from expanding in order to allow our Milky Way to form. Or God could have inserted a pre-made galaxy. Or he could have inserted an additional force that operated only within our galaxy and that countered the effects of the expansion. Or any number of other possibilities, because God can do anything. 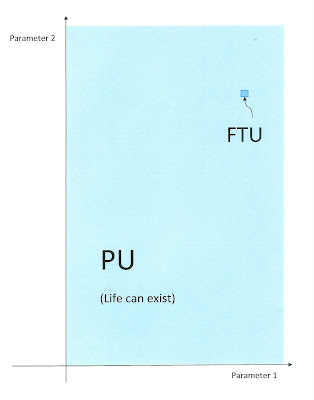 That is, the probability of a fine-tuned universe under the theistic hypothesis is:

Conclusion: given that we know that life exists, the probability of discovering we are living in a universe with parameters fine-tuned for life is much higher under the naturalistic hypothesis than under the theistic hypothesis.

Posted by Robert Oerter at 9:27 AM